The United States Constitution is a mess. For 73 years it held together, crudely, like a quilt of bandaids, all of the piles of compromises that were required to keep petulant slave states happy. After the Civil War, the thing should have been rewritten completely and all the structural compromises designed to placate the backward states should have been removed.

It has now gotten to the point where the American system of government is one of the biggest problems facing the country. The 21st Century moves fast, and yet America has an 18th Century operating system. We are unable to keep up with the world. The last two decades have essentially been lost to idiotic gridlock and the classic “land war in Asia” blunder. We can’t afford any more lost decades.

To fix the Constitution requires we adjust the map. The shape of our states are a product of conflicting land grants from foreign powers, long-forgotten political battles, violent battles, historical oddities, and antique surveying capacity. States are gerrymandered just as badly as House districts, but they don’t have the benefit of being redrawn after every census. State lines and especially House district lines are supposed to represent a slippery notion of “communities of interest.”

If we could do this all again we would do it differently. Where would the borders be? Using data from wheresgeorge.com we can see the border lines of American micro-economies. The thicker the line, the less likely a dollar bill crosses it:

Any new state maps should respect these boundaries that we have made ourselves. Like this, the map of our money. There’s other maps that visualize the clusters of sports fans. But that’s basically a map of major American cities and the occasional region. (There happen to be 38 of those – more on that map later. )

And this, the map of our ideology: This map reflects many different types of maps—including maps showing the distribution of linguistic dialects, the spread of cultural artifacts, the prevalence of different religious denominations, and the county-by-county breakdown of voting in virtually every hotly contested presidential race in our history. Our continent’s famed mobility has been reinforcing regional differences, not dissolving them, as people increasingly sort themselves into like-minded communities:

In a perfect world, we would rethink the Senate and the states without regard for politics. We would use social sciences like those reflected in the 11 American Nations map above. Or we could use more hard sciences like hydrology.

Back in the 1800s, the Director of the U.S. Geological Survey proposed that we divvy up western states based on watersheds. There’s sound logic there. Much of the west is arid, it’s going to come down to everyone freaking out about water anyway,  yet our arbitrary land grants were horribly implemented with a pencil and a straight-edge ruler. If we bothered to ask the Earth, she’d say the actual regions of the west look more like this: 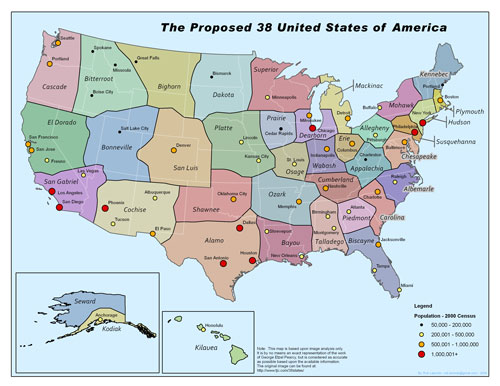 That mapmaker gave high priority to population density, location of cities, lines of transportation, and land relief to determine the shape of individual States. Borders are located in less populated areas because each state surrounds one of the population centers in America, of which there happen to be 38.

Another mapmaker redrew the 50 states to have equal population so that the horribly stupid Senate would be as democratic as the House.

Then again, to hell with the Senate. That was a dumb compromise designed to slow the country down and placate slavery. I think that in a perfect world, we’d abolish the Senate.

But as we see in North Carolina’s 12th, gerrymandering often packs a state’s minority voters into a small number of districts so as to diminish their clout everywhere else. One superhero computer programmer did all the states this way – i.e. “fairly.” With regard to this redistricting thing, as in many other things, the USA can’t get more brown fast enough.

Germany is a smaller, better-managed country than the U.S. and they have 620 seats in their legislature. A democracy with a population closest to the U.S. is Indonesia and they have 560 seats in theirs. Brazil is slightly smaller and they have 513. So what if we go from 435 to 500 house seats, allow the districts to form 38 Regional “working groups,” and we completely abolish the Senate? How about that?

Do I think any of this will happen?

Because we can’t have nice things.

This is a fun political thought experiment, though. I do believe something needs to be done. We can’t limp along like this in the 21st century. We just won’t make it. Things fall apart faster than they’re built. I like asking big questions and wrestling with the repercussions.